Lounging on the Cosmic Ocean, or B. George Goes Cratedigging In India 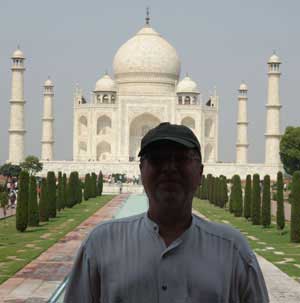 Last year the ARC focused on the music and culture of Brazil. On my visits to Rio and Sao Paulo I found music everywhere and plenty of vinyl. It seemed like every block had a street vendor selling LPs. OK, maybe the discs were cleaned with sea water and beach sand, but they were easy to find. Plenty of high-end stores too. Not so in Delhi and Mumbai.

When I last visited India to give a talk, I tried to meet as many collectors and visit as many archive and music libraries as I could. And maybe do some shopping. For that I brought an empty suitcase for LPs, and a 10” padded box for a Beatles 78rpm recording. Seventy-eights were made in India, Malaysia and Indonesia into the 1970s. After all you didn’t need electricity to power a spring driven gramophone, so the format remained popular in places where juice was in short supply or very expensive. You can get a feel for the range of wonderful music recorded on 78 rpm in India by going to Sunny Mathew’s 365 videos on this site. Classical, devotional and political dominated the early years of Indian sound recording. Modern imports were heavy on American pap and British pop. In the 1960s Cliff Richard was immensely popular, judging from the number of releases I found in the shops.

Finding the shops, that was the trick. New Delhi is an immense city with about six street signs. Google all you want, the best way to find a place is to make sure you know a major landmark very near where you want to go. Plus lots of phone calls from the street. Plus asking everyone nearby. You'll need luck. Oh, and time.

One excursion was into the Old Delhi part of New Delhi searching for a rumored record shop called Shaw Music Centre. I had the address but I was going in circles for about an hour until a cell plea resulted in the owner sending a guide. You can do it yourself, here’s how. First go to the cotton market sign in Chowdni Chowk, and into the cotton market, where there is no cotton, only piles of bricks and aggregate. 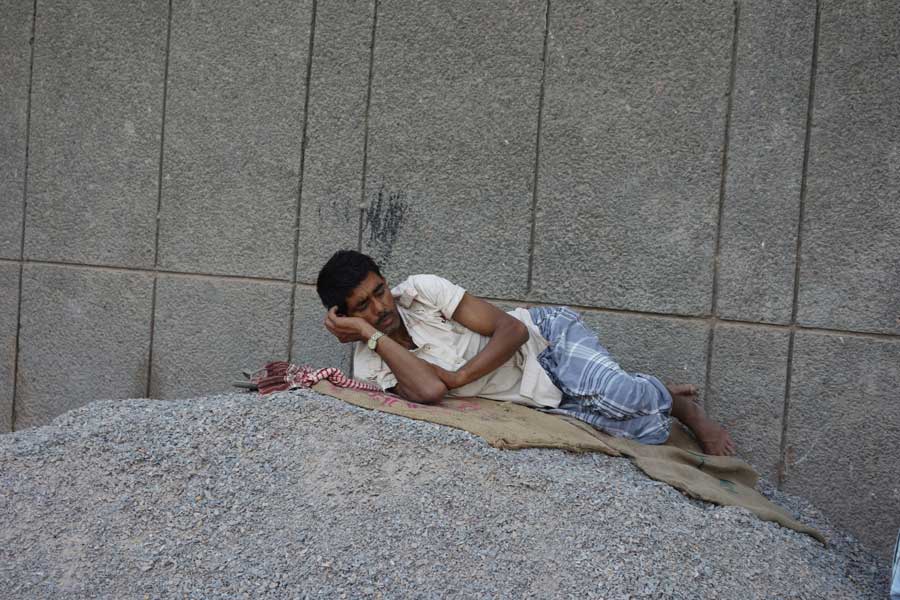 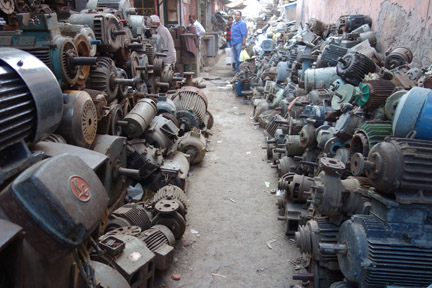 Walk past Vishnu resting on the cosmic ocean… THEN, you jig to your left and down a stairwell into the motor pool, or pool of motors, that stretches till the end of time. 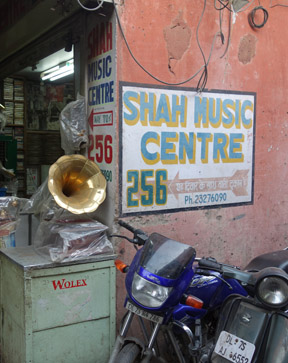 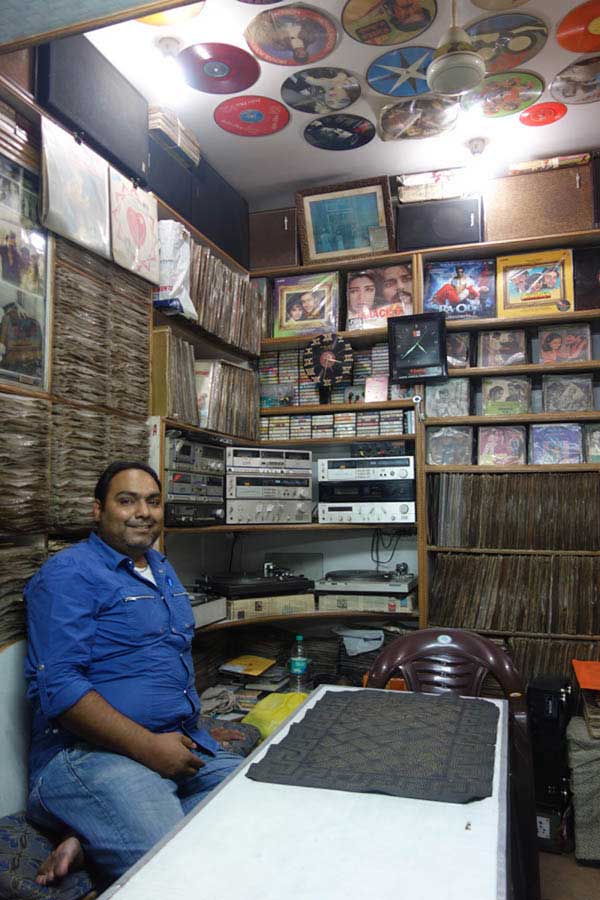 Take a left, straight on till dawn,

or until you see his sign. There you have it. Mr. Syed Akbar Shah himself amidst his treasures on earth. Syed is affable and fair. This family business is legendary, around for more than 70 years. Known for preservation as well as marketing, they have carefully set aside every HMV recording ever made. Yes indeed, he had a pile of Beatles 78s. Not here and not now. Could I come to his house tomorrow? Sure. 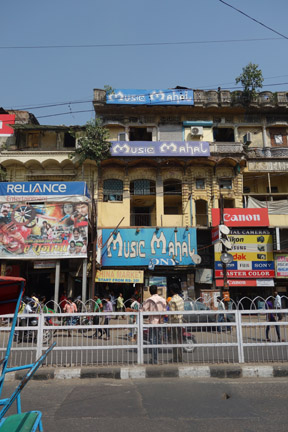 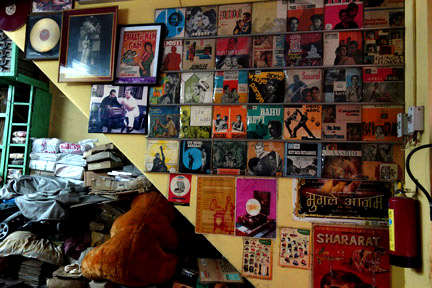 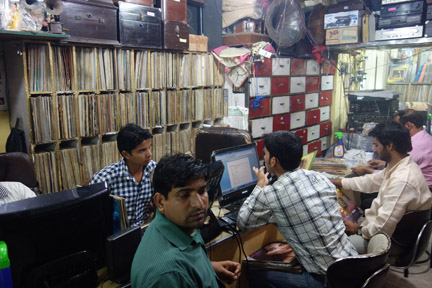 I ended the day by visiting the better-known, and easier to find major dealer in the city, Music Mahal. Go to the back of the shoe store, up the stairway that tells you you’re in the right place, and into the modern world of the record dealer today – eight guys marketing online. Not friendly, lots of great stuff, but they know the value of things. No Beatles 78s. Begrudgingly you can riff through the shelves, and I did this looking for interesting covers rather than any particular recording. Along with Van Shipley LPs I bought colorful junk (see the gallery section) and left happy.

The next day it was off to Mr. Shaw’s garage-cum-store in another part of town. He kept the motor related theme going, the stacks just past the cars and bikes. 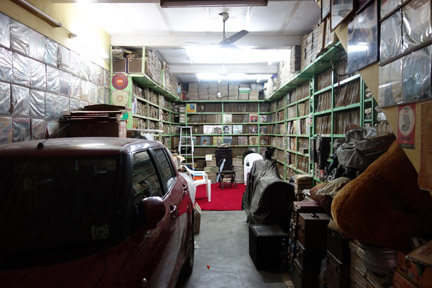 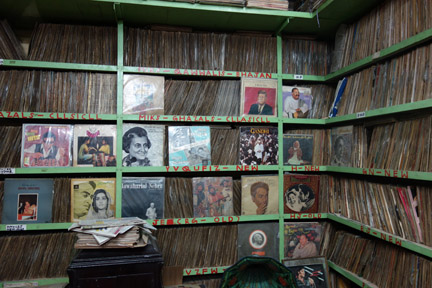 I had invited Janet Topp-Fargion, head of the International Music Collection at the British Library, promising an ‘adventure.’ Just getting there was loads of fun – a madcap motor rickshaw ride through the teeming narrow streets, multiple getting-losts, and the jackpot destination. The recordings were mostly LPs. There were many shelves and floorpiles of 78s, each disc sleeveless, padded-separated by newspaper squares. 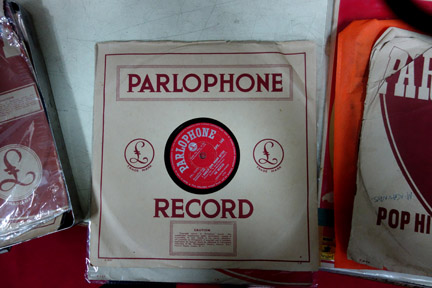 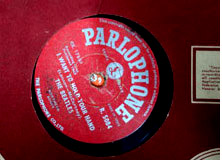 He had laid out a little hors d'oeuvre table of Beatles 78s, from early “I want To Hold Your Hand” to latter “Yellow Submarine.” Woulda, Shoulda, Coulda. I had come all this way and the prices were the same as in the UK or online, between $1,000 - $2,000. The good part was you could examine the goods, the drawback was the cost. I sighed and settled for a pile of singles and LPs in the $5-$30 non-moptop range. I bought some 45s by Western artists for their Indian labels and a Lata Mangeshgar with her on the cover going through a stack of wax near a 1950s console player.


Inadvertently Mr. Shaw contributed a new catch phrase to the Librarian’s lexicon. While searching for a particular recording I had asked about, and frustrated by the chronic misfiling that rules our world, he said, “I’ve lost my alphabet!” I remember that maybe twice a day, every time it takes longer than it should to find something. 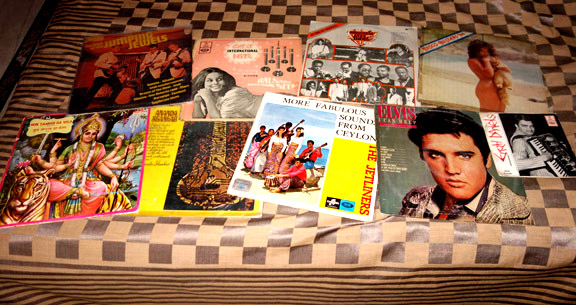 Here’s a photo-on-bed-forgive-the-quality from the first days of shopping. All Indian pressings. Notice how much Elvis looks like a Bollywood tough guy.


Disco was big in India in the 70s and 80s with many more local releases in this genre than rock - Disco affinity reflected in the film music to this day. Lets pretend my interest in studying this phenomena explains buying the Disco Busters’84 LP and not the fact that it boasts a rare-for-India cheesecake cover.

I bought any and all electric sitar and sitar mashups and messups I could afford. Some of these are illustrated on our gallery pages or discussed on the raga rock page. Ananda Shankar is an artist already well represented in our collection, but we didn’t have this one. . And who could resist Balsara and his Singing Sitar Or the 7″ of Enoch Daniels playing a slew of Filmi hits on his big-stop accordion? I also got a pile of Muslim devotional CDs for $1 each near the Jama Majid mosque. 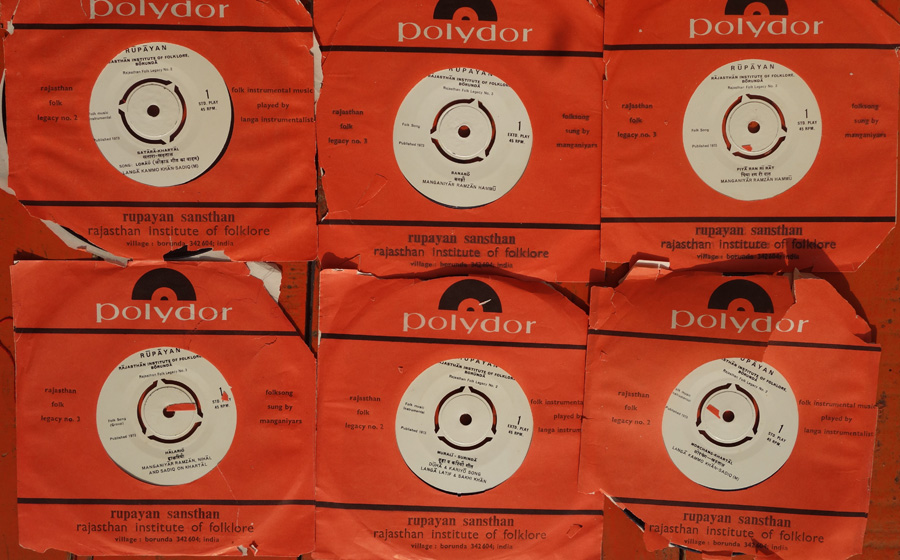 In Rajasthan I visited the Rupayan Sansthan, The Rajasthan Institute of Folklore in Jodhpur. Mr. Kothari, head of the Institute, graciously donated this series of six privately issued out-of-print singles to the ARC. He remembers maybe in an edition of 500 in the early 1970s. I still hope to get others in the set (how many others?) as they search for them. These are field recordings of traditional music, offering a glimpse into performance practice at the time.

Next stop Mumbai (Bombay), my guide Dr. Suresh Chandvankar. Suresh is a gifted scholar, collector and one of the principlas behind The Record News 78rpm journal. He didn’t have any leads on a Beatles ten-inchers, but he brought me to Chor Bazaar (nicknamed the Thieves Market – I wonder why?) and introduced me to some of the shop owners. Here lies the best priced discs I found – most around a dollar or two – good things but not great treasures. If you go try not to visit on Fridays as a great many dealers are Muslim and shops are closed. Can’t really give you directions to these few and far between no-name shops, but you can usually spot a record seller by the dangling discs outside a stall. 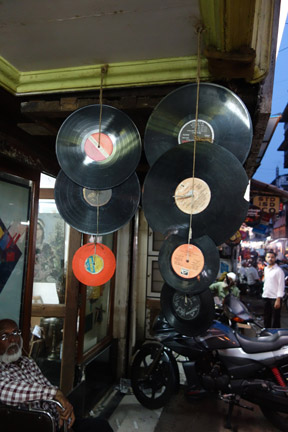 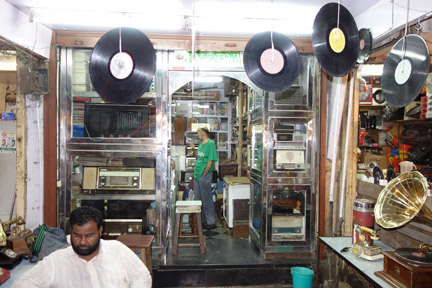 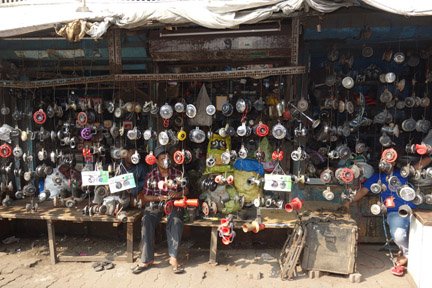 Speaking of roadside attractions one nice discovery was a whole street of automobile horn dealers. The horn-walla will help you pick the perfect pitch by attaching a car battery and offering a piercing sound sample. Horns are as essential to driving in Mumbai as a turn signal nonexistent. Modern India is set to replace the generative “Om” with a chorus of honks, every blast a warning of things to come.

Another lost (to me at least) sound was on a wall of a restaurant I visited with journalist and author (Taj Mahal Foxtrot) Naresh Fernandes. It was good enough to frame. 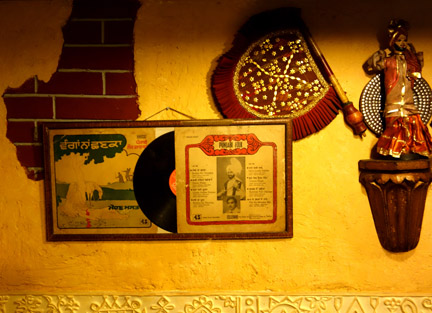 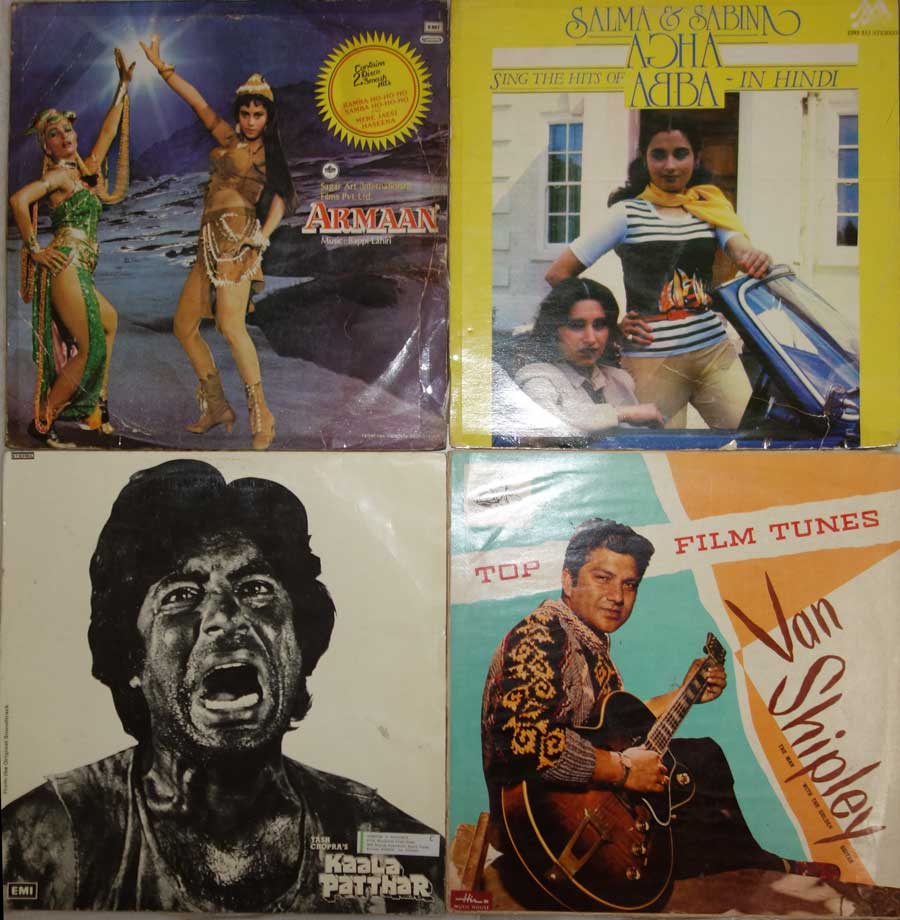 Here’s a few more finds from Chor Bazaar and from a dealer arranging records around a column in an arcade in Fort, Mumbai. Maybe he’s still there: Kitab Mahal, near 192 D.N.Road. To my delight the top two Indian LPs spanned last year’s Brazilian Music Day (The Armaan-ies do a Hindi-samba) and the next musical focus on Scandinavia (S+S-ers cover ABBA). Who could ask for anything more? 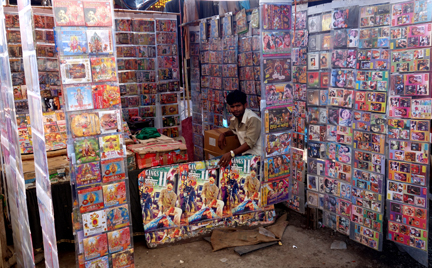 I also purchased a great many classical recording, but while the music is transcendent, the covers are less that showing you worthy. Here's a closing snap of what the people want, Bollywood DVDs and CDs. More than one person told me on my trip and more recently; there is no record industry in India - only a film industry.

I would go so far as to say that India is not a musical country (heresy!). Let's go back to Brazil for a momemnt. Everywhere you go there is man-made music; someone singing, strumming, banging, dancing. But if this is somewhat romanticized, in India a prevailing idea is that music is a very demanding discipline. So many years with a guru, traditions to uphold, complex instruments, perfection with religious overtones. Who could and would be a musician also involving caste and status. Proof is that even in the most popular of popular arts, Bollywood, the actors usually do not sing, but mouth at least five songs per. So even this is left to a professional.
Best cell: 9810178657, 9212789786     e-mail     They have 2+ nice pages of Beatles 78s on their website.
9990587288, 9810646628 (011) 23867777, 23867878